Do you like playing with your mates and solving logical puzzles?
If you have succesfully finished Play Across Prague and looking for slightly different experience, try one of the Exit the room games, that are also located in Praha.

Mindmaze
Offers two different themes – Alchemist’s chamber where you are searching for philosopher’s stone and Enigma, where you need to steal the blueprint of the submarine from the base of the enemy forces.
Address: Tyršova 9, Prague 2

Trap Prague
Offers three theme games,
Secret agent: You will be locked at the Secret Agent room, any you have to find secret agents files.
Address: Senovážná 8, Prague 1
Secret of Tomb: The only way to escape, is finding the urn of Lucille s ash, which tells you the number for the exit.
The Bomb Room: you have to deactivate the bomb, that is hidden in the room.
Address: Jungmannova 12, Prague 1

The Chamber
Find the secret of The Chamber.
Address: Bílkova 854/21, Prague 1

Getaway Prague
Getaway Prague currently ofers The Prison, where you obviously have to find the secret file and escape the prison. Time limit one hour. The Gambler, second version ofered by Getaway might be ready soon.
Address: Blanická 9, Prague 2

Puzzle Room
A room full of riddles, locked boxes, peculiar sounds, misleading traces…and you will get 60 minutes to escape from it.
Address: Čechova 10, Prague 7

The Room
The Room is an adventurous escape-game developed by a team of psychologists. The Roomchecks your skills to think in a logical way, to improvise, to resist the stress.

Escaper
Professor’s office: The office belongs to a well-known professor of chemistry. He has been acting very strange recently and is not reachable at the moment. His colleague is asking you for help. He has started a secret investigation.
Address: Soustružnická 486/3, Prague 9

Lost rooms
Hotel le Marais in Paris – in one of the rooms was a mysterious murder. You will have to disclose the identity of the dead man, get out of the closed room in 60 minutes.
The Black Room – Quest in the dark. Defeat your fears and manage to solve puzzles to get out of the black room. Discover new sensations: when you can’t see anything and you can only trust what you hear and your friends.
Museum Robbery – Top-tier thieves are aiming to crack the vault of the National Museum. But things are getting tricky once their leader got caught by the police while the others realize he was the only one to know the whole plan! Restore it, identify the most valuable exhibit and escape before the cops arrive – all in 60 minutes of pure fun.
Big Bang – Dr. K’s bold scientific experiment is out of control! Gravity distorted, people walk along the walls, and there is not far to most of the Big Bang! The team of friends has just an hour to rectify the situation, turn the course of the experiment back and save Penny, who was locked in the laboratory.
Address: Žitomirská 38, Prague 10

The Attorney – The story takes place in the summer 2010. You have spent several weeks traveling throughout the United States. During your last day you meet a very charismatic gentleman who had moved to the States a couple of years earlier and works as an attorney. He told you he was running to the court room and accidentally forgot his briefcase with copies of the files and other documents in the luggage room at the Chicago railway station. Can you help him to retrieve the documents? Experience the unconventional atmosphere of the Chicago railway station and the police station where you will need to solve riddles and use the indicia in order to find the missing documents. However, later on you will discover that something seems not to be right. It is probably a dirty trick!
Address: Mečislavova 18, Praha 4

Locked in Prague
Game takes place the day the Reich Protector R. Heydrich was assassinated, you find yourself locked in a flat owned by Pavel Novy who has just been taken away by the Gestapo. Your mission in to discover and protect the secret Pavel is hidding and find your way out before it is too late!
Address: Husinecká 567/3, Prague 3

ExitGamePrague
Sherlock’s office – The story of the game is set into the era of Victorian England and you along with your friends will have the chance to visit Sherlock Holmes’s office. During the time of his absence it’s up to you to solve the case of a serial murderer, with ever-increasing body count on his hands. Can you track him down before he kills again? To overcome all the obstacles, puzzles and ciphers you’ll need to demonstrate your wit, dexterity and extraordinary investigative skills.
Address: Rokycanova 459/7, Prague 3

TheBreakOut
Charles IV. ordered new set of crown jewels, but just before the work is done and get to introduce it to the public one of the biggest diamonds has disappeared. King Charles IV. has invited the most experienced reeves (you the players) to solve this mystery. Charles IV. is anxious and gave just 60 minutes to find the missing diamond. If the reeves solves the mystery they will be greatly rewarded, but if the diamond remains lost…
Address: Petrská 29, Prague 1

Czech Trap
It is 1970’s in Czechoslovakia. The dark time of communism and normalization process. Anybody who is stepping out of the line is suspicious. Anybody who shows an interest in democratic principles gets arrested. The game is set in the authentic building of an old print shop built from 1928. The print shop director is a secret member of the resistance movement, but his identity became known. It is up to you to find compromising materials in his office before the enemy arrives to search for it. Save the country and protect its people.
Address: Opatovická 18, 110 00 Praha 1

Questerland
Va-Bank adventure
When you decide to rob a bank, you have to be really prepared for anything. Just one wrong decision and the situation could develop in wrong direction. Here awaits an exciting challenge with lots of unexpected twists and surprises.
Address: Manesova 54, 120 00 Praha 2

Escapemaster
Asylum
The doctors and nurses in this hospital perform un-approved experiments on their patients. One of the most feared and insane patients is patient #27. Anna, one of the nurses, was in charge of this patient. Her task was to administer experimental medicine regularly and monitor the impact it had on the patient´s body and mind. One day Anna mysteriously disappeared during her shift in the asylum. She was last seen by patient #27. who’s the only one that knows what might have happened to Anna. However he encoded the truth and hid it in a cypher that he created on his own.
Address: Prosecká 524/26 Prague 8

Escape-rooms-Prague
Communist Czechoslovakia
Become an ordinary citizen of former comunist Czechoslovak republic in the years 1970 – 1989. Take a journey from totality to freedom. Have a feeling as activist of velvet revolution on your skin. Use your brain and escape back to now together with your teammates.
Address: Na Příkopě 12, 110 00 Prague 1, Czech Republic

Mazement
The Bequest
Your grandfather was a famous inventor and businessman. At the end of his life he found out that mafia is trying to get to his fortune and therefore he secured it in a safe in his office.
He prepared clues for you to get to this heritage.
Address: Polska 40, 120 00 Prague 2

Runaway
Archimedes’ secret
After his death the Archimedes house was searched by Roman soldiers who took away all his valuable work. The only file consistently remained hidden in the bowels of a secret study – file studying possibilities to influence the Earth’s gravitational field. Find that file before Roman soldiers returns!
Access to the secret workroom is protected by numerous codes, puzzles and discoveries of Archimedes himself. Check observation, logical reasoning, ingenuity and teamwork. Can you manage to find a secret study, file and forgotten the way back?
Address: Parléřova 74/7, 169 00 Prague 6

Door Z
Spring 45
SS troops captured you along with your partisan squad. You are now locked in a barn awaiting execution by shooting. To escape certain death and disarm the Nazis you need to get out of the barn, sneak into the headquarters, open a secret bunker and destroy it.
Monako Heist
Champagne, yachts, girls, and casino! After flushing your last Benjamin in roulette you venture to rob one of the most powerful people in Monaco – a billionaire. Rumors have it that he keeps part of his enormous jewelry collection right at his residence.
Address: Václavské náměstí 11, 110 00 Praha

LostExit
House of Grief
The House of Grief belongs to gravedigger Adam. He lives in small town in 1980s. He becomes the crown witness, after there are found ten death people behind the cemetery wall. Later he is warned by his friend, the neighbours want to kill him. He need to left his house. Has he reached it or not? You will see it in our escape room. You will solve a lot of ciphers and have 73 minutes to escape.
Address: Na Pecích 476/5, 180 00 Prague 8–Kobylisy

Exit Room Prague
The Bombing of Prague – Adolf Hitler’s last plan
Step into history and experience the bombing of Prague on February 14, 1945 in a real historical bomb shelter. Meet a contemporary hero who will take you back in time to the end of WW2 to places which were truly bombed by 62 US B-17 aircraft for unknown reasons.
Sirens announcing the danger of an air raid sound above Prague. Nobody takes them seriously. Prague has experienced so many false alarms in recent weeks. But today will be different…
It is February 14, 1945.
Address: Slezská 98, Prague 3

iEscape Game
Fancy yourself as a have-a-go-hero? Think James Bond! You and your team of international investigators have revealed a huge underground conspiracy. But you’ve been caught and are now being transported along with the contraband to an unknown place. Something has gone wrong with your plane, and the smugglers have decided to parachute out. You… locked in chains… are running out of fuel… and are without a key to the cockpit. You can’t leave the plane, and you can’t fly – you’re really in trouble!
Address: Zborovska 47, Prague 5

Mystery of the puzzle
You and your friends will find yourselves in a clubhouse, which decades ago belonged
to a group of friends.
The clubhouse has its own history, which has been a secret for a long time.
You must lift the veil of mystery together and solve codes and puzzles waiting for you.
Can you find the secret puzzle, before a mysterious man with a mask enters the
room?
Address: Italská 1274/8, Prague 2

Riddle Twist
On his deathbed, old painter Balko said that his only masterpiece, picture of Saint Xaverius, leads to a treasure. Despite many have tried to crack the mystery in the past, nobody ever found anything. It became a mere tale. But what if it is true?
You and your team will get a chance to be in the church alone for 75 minutes. Embark on a very special adventure in a church of mechanic genius. Inspired by first Czech sci-fi, written by Jakub Arbes (1840-1914). The game is very interactive, non-linear and doesn´t contain a single padlock.
Address: Wenzigova 11, Prague 2

Nuclear Bunker Room
The story takes place in Czechoslovakia during the Communist times. The resistance hid secret documents in a fallout shelter which could dramatically influence the political developments in the Soviet Union. These documents are very well hidden and are not easy to track down. Someone made really sure that they will never be founded by the wrong person!
Your team has been chosen as the perfect spies for this unique mission. Your task is to find and deliver the secret documents that must never get into the hands of KGB agents. You have 60 minutes to complete this task. Get ready for a thrilling adventure and discover whether these secret documents could truly cause a regime change of history.
Address: Husinecká 792/25, Prague 3

Do you know any other exit game or treasure hunt game in Prague? Let me know in comments!

This site uses Akismet to reduce spam. Learn how your comment data is processed. 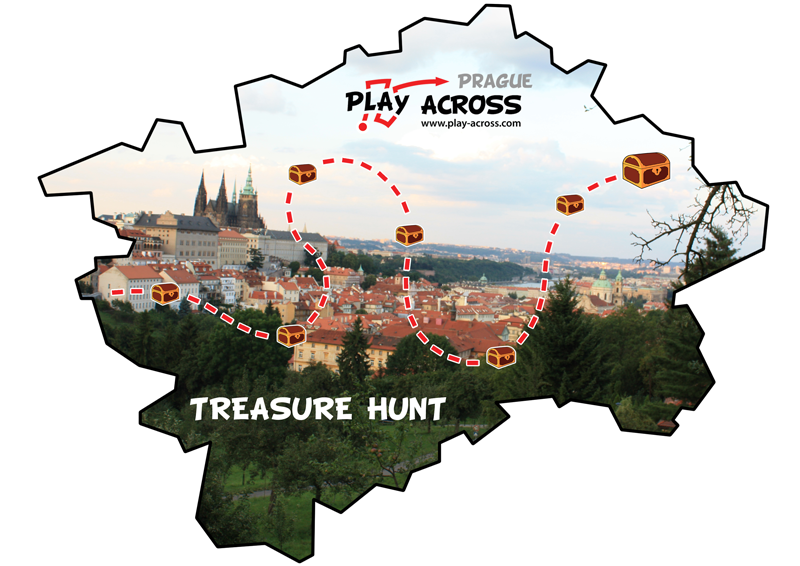 Solve the online puzzle and get 50% discount for the outdoor game!